Doing Business in Russia: The Quality of Logistics Infrastructure 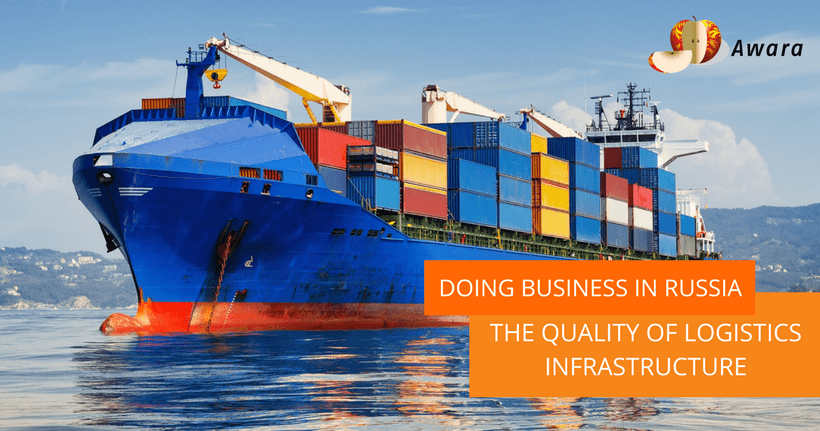 Doing Business in Russia: The Quality of Logistics Infrastructure

Last week’s blog entry started a discussion about Russia’s logistics performance. This post digs deeper into various aspects of the nation’s logistics environment. The importance of different aspects of logistics performance greatly varies between companies, depending on the sector (e.g., retail, manufacturing, service provider), industry (e.g., metal refining, oil production, wholesaling) and their own supply chain strategy. The last one refers to, for example, a company’s choice of outsourcing logistics or delivery terms (also Incoterms – International Commercial Terms that define obligations, including costs and risks, of buyers and sellers for the delivery of goods under sales contracts).

The Logistics Performance Index (LPI), developed by the World Bank, was introduced in a previous blog entry as a quick outlook to Russia’s logistics performance. LPI measures six key dimensions to benchmark a country’s logistics performance. Two of these, customs and infrastructure, are closely related to the public sector, based on regulatory power or as an owner. These will now be discussed in the context of Russia.

Efficiency of the Clearance Process

This indicator measures the efficiency and easiness of international trade (including import and export) from border control agencies and customs procedures point of view. Scoring is based on speed, simplicity and predictability of formalities with these authorities. In the latest LPI, 2014, Russia scored 2.20 (out of 5) on the Efficiency of the Clearance Process measure, improved from 1.94 in 2007. The approximate clearance time with physical inspection on the Russian borders was 3 days, while the time without physical inspection was one day. A quick comparison with some Western European countries indicates that especially time with physically inspected shipments ought to be decreased. Also 17 per cent of import shipments have been physically inspected which is a relatively high share compared to other developed countries.

However, it is important to remember that Russia does not currently have general free trade agreements with all neighboring countries, which makes comparison to for instance EU countries difficult. Introducing these kind of agreements, which have been proposed regularly, could greatly reduce the need for customs processes and thus improve LPI scoring rapidly.

Logistics infrastructure does not cover only the physical transport infrastructure but also the quality of logistics related information and communication technology (ICT). The backbone of all logistics is a well-functioning transport infrastructure, i.e. ports and terminals, railroads, and roads that all require massive investments from the public sector. Two main parts of transport infrastructure can be identified: a national network that serves transport within the country and infrastructure related to international trade. In national freight transport, road networks (especially Russian federal highways network) and railway networks are key corridors. Considering international trade, most volume intensive trade (i.e., raw materials) is transported via sea ports. The major ones are located in the Far East Basin (Vostochny) and the Baltic Basin (St. Petersburg), of which in the combined throughput was almost 4,300,000 TEUs (twenty-foot equivalent unit) in 2013. The largest ports by volume are located in the Baltic Sea, which is located near the population-rich areas of Moscow and St. Petersburg. These two important export hubs have also received major investments at both the seaside (port and passages) and landside (connections to national infrastructure network).

Alongside the current developments of road and railway infrastructure, many of Russian key infrastructure improvement projects have also developed transport related ICT. An example of this is equipping highways with state-of-the-art telematics and communication capabilities, as well as the introduction of ERA-Glonass satellite navigation system. Major road and rail investments, together with improvement of port facilities improved Russia’s Infrastructure LPI score on from 2.23 in 2007 to 2.59 in 2014. More importantly the scoring shows a steady growth throughout all the reports and is on the same level with regional (Europe & Central Asia) average. Yet, compared to some large economies like China (not to mention the top performer – Germany) there are many things to improve from the infrastructure perspective, and in a country as vast as Russia, these developments take time also because the environment varies so greatly from region to region. 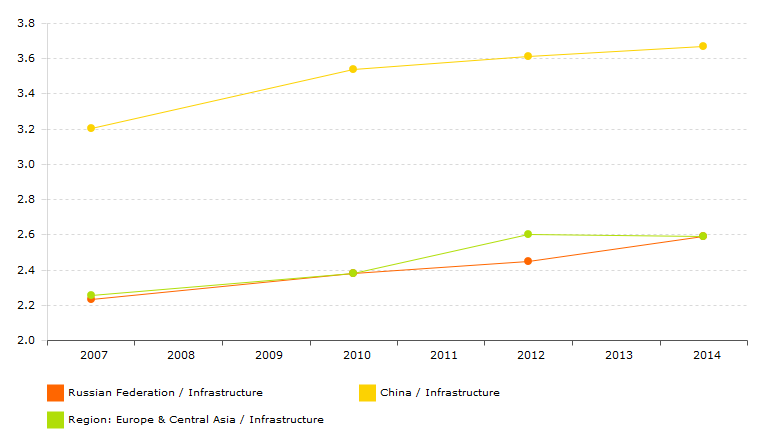 Infrastructure and customs are not only issues that define the friendliness of a country’s logistics environment. However, the quality of these provide the basis for a logistics system that allows companies to fulfil the needs of their customers by delivering products and services to the right place at the right time with superb quality. In many countries infrastructure is the responsibility of the public sector (or public-private-partnership) or at a minimum regulated by authorities. A well-functioning transport infrastructure and customs procedures set a platform for logistics service providers to operate. In our next blog we will wrap up the logistics topic by going over the remaining four LPI indicators that are more related to logistics services arranged by companies:

Doing Business in Russia: A Logistics Point of View 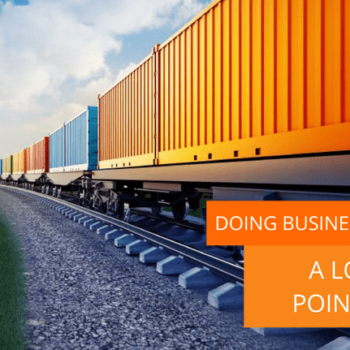 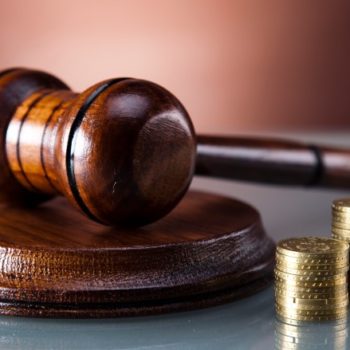