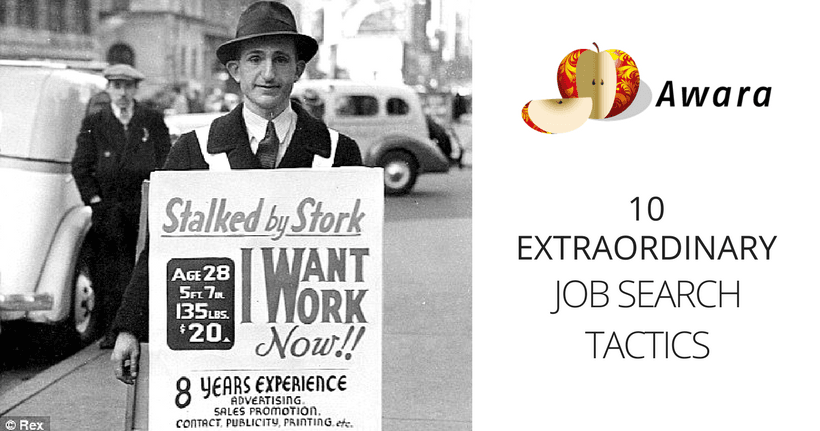 In our previous article we spoke about Most Creative Recruitment Campaigns companies all over the world can use to find best talent. But what about job seekers? High competition in today’s job market makes it hard to stand out from the crowd that is why some candidates try rather extraordinary tactics to get noticed and make a lasting impression on an employer. Let’s have a look at the selection of the most interesting cases. 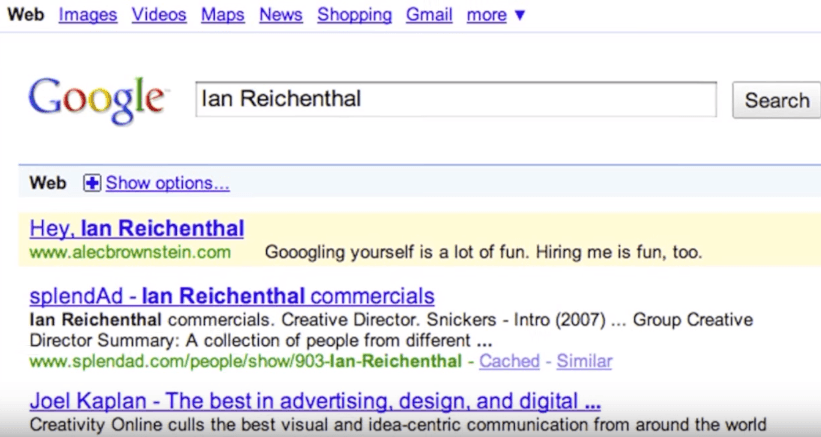 If you do not want to figure out all the intricacies of setting up Google Adwords, you can choose an easier option. Ian Greenlaw proved that advertising on Facebook is well suited for finding work: ads he placed were seen by the marketing directors in Austin, Texas (USA). Ian received an invitation for an interview from several of them.

3. Sell yourself on eBay

As it turns out, you really can buy almost everything on eBay: even employees. In 2011, 18-year-old Josh Butler, desperate after several unsuccessful attempts to find a job, decided to try something unusual: he put himself on the auction site eBay with an initial price of 16,000 £. The crazy (or creative?) trick helped Josh to attract attention and receive 3 job offers.

4. If you want results, rent a billboard

A person can go really far while trying to get noticed. Feilim Mac an Iomaire, a marketing expert from Ireland, was not getting any luck in finding a job and had already begun to think about emigration. His last attempt was to rent a billboard in the city center with a huge inscription “Save me from emigration” and links to his social profiles. Within a few weeks Feilim received countless invitations to interviews and ultimately a position in Paddy Power. Advertising in the center of the city ended up costing $2,000, but there is no doubt that it was a worthwhile investment. 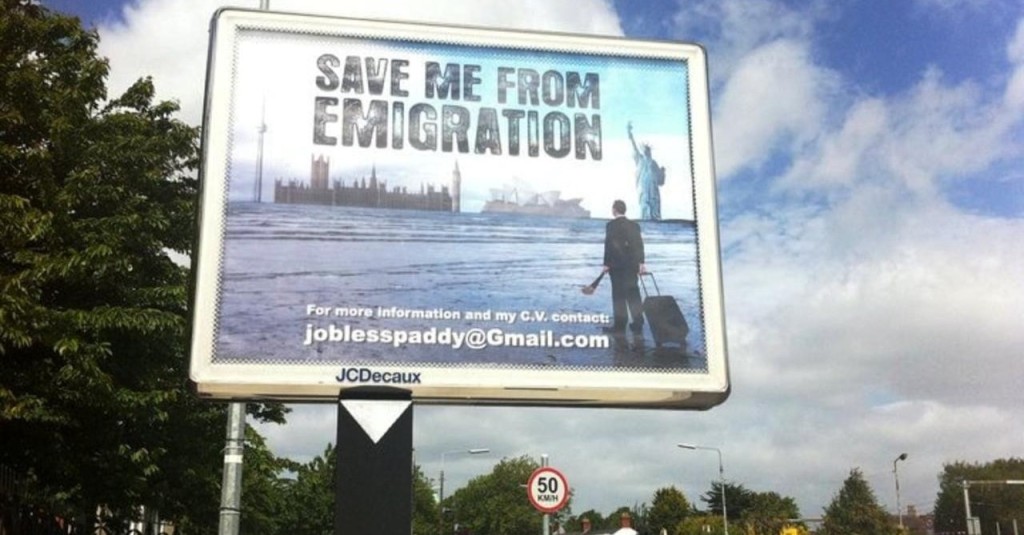 Adam Pacitti took a similar approach, after more than two hundred companies ignored his resume. Adam rented a billboard and launched a campaign in social networks. When he finally got a job, he did not spare the expense to use his first paycheck to rent a billboard again and thank everyone who helped him. 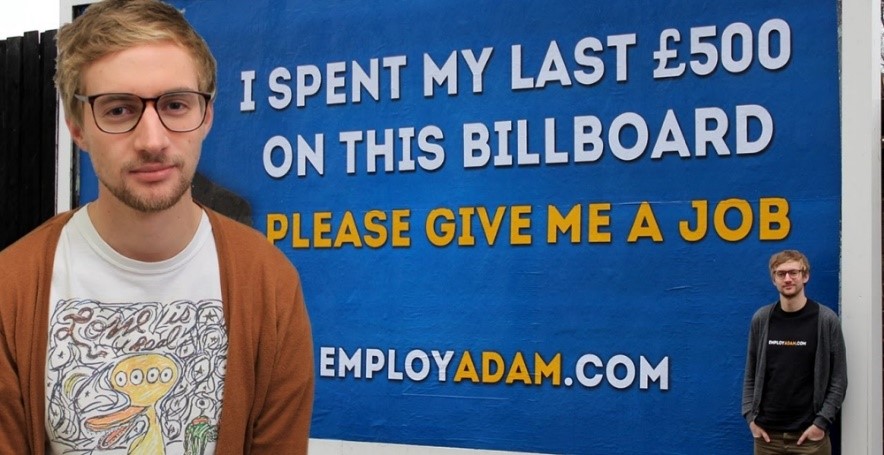 5. Christmas lights can help to find a job

Liz Hickok, Georgia, USA, decided to attract the attention of employers using Christmas lights. Instead of holiday greetings, Liz wrote the following using garlands: “My dream – HR job. Liz Hickok – Linked In”. The response to the creative advertising was a series of calls from neighbors and lots of LinkedIn messages.

6. Create a resume site and make it popular

Young and talented programmer Andrew Horner created a website where he asked employers to send him a job offer, rather than sending his resume to companies. “I will favor those job offers which fulfill my listed preferences,” wrote Andrew, “but you shouldn’t worry too much if you don’t meet all of them; just be sure to let me know exactly what it is that you feel your company has to offer me.” The bold statement of the programmer attracted a lot of visitors to the site. In total, he got 44 offers of employment and a position in a financial company.

“My name is Michael Freeman, and I want to work at Shopify” states the About page of the website created by Mike Freeman, who was interested in working as business analyst in the company which develops software for online stores. On the main page visitors can see a headline which reads “I noticed that Mike Freeman does not work for you guys yet. Let’s fix that.” Management of Shopify appreciated Mike’s sense of humor and could not resist offering him a job.

Love of photography and IT technologies influenced the decision of Alice Lee, a student at Pennsylvania State University, USA, to create an attractive site in which she expressed her motivation to join the Instagram team. Her website “Dear Instagram” has become very popular (for example, such well-known resources as Business Insider, The Atlantic and The Next Web have been happy to share the history of Alice with their readers). Though Instagram did not hire Alice, she later got a job at the company named Path. As Alice later joked, she did not even have to create a site “Dear Path”. 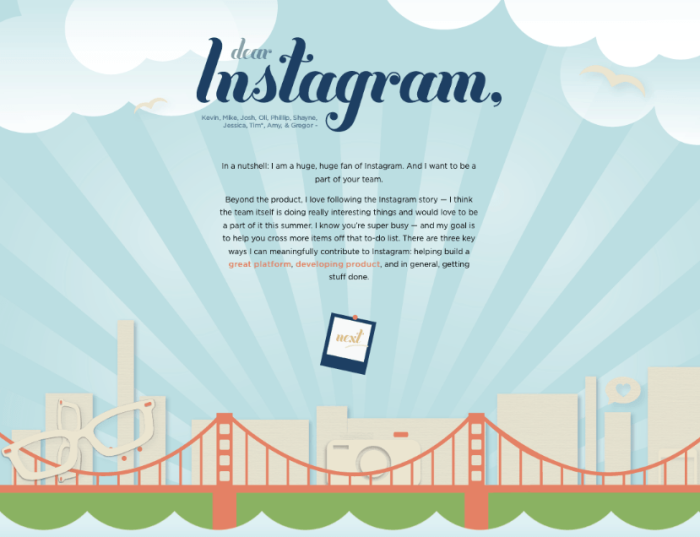 Marketing specialist Nina Mufleh from Jordan spent a long time trying to get noticed by Airbnb (online platform for search and rental of housing), but without much success. Rather than abandon her attempts, Nina decided to take a non-standard route. She created a website where she not only wrote about her experience, but also presented the results of her own study of the tourism market, and proposed a development strategy for Airbnb in the Middle East. Within a few hours after sharing the website links on Twitter, she was contacted by Airbnb recruiters and invited to an interview. In the end, Nina did not get a job at the company, but later she got a position of Growth Manager at Upwork (Internet platform for finding freelancers). 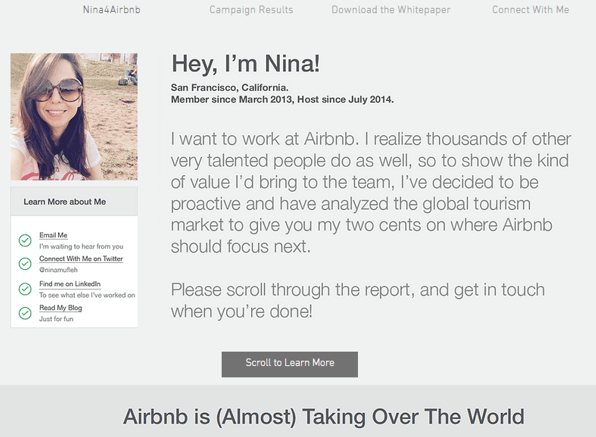 People who do not want to create a web site and conduct research can try to hack into someone else’s site.

Chris Putnam was hired by Facebook in 2006 after he hacked into the site and spread a virus which made some of user profiles look similar to MySpace pages. Soon Chris was contacted by Facebook representatives and asked for an explanation in a rather friendly manner. Instead of arrest and trial Chris was invited to a job interview. 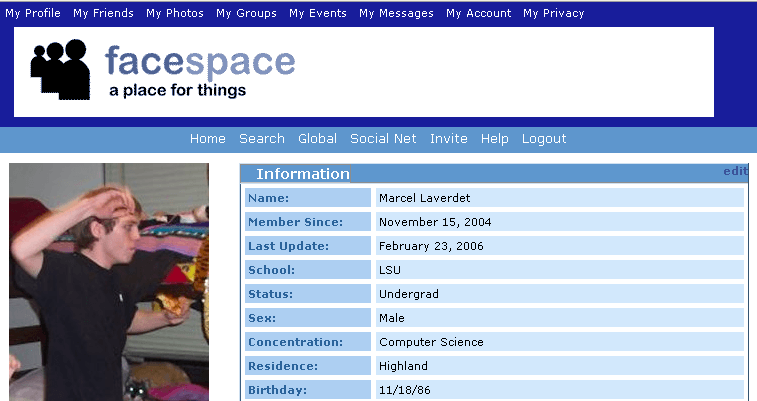 8. The main thing is to choose the right restaurant

One observant and resourceful applicant got a job in the following way: she noticed that the director of the company she wanted to work at constantly mentions the same restaurant in his blog. The persistent young woman persuaded the owner of the restaurant to add her name and contacts to the menu. 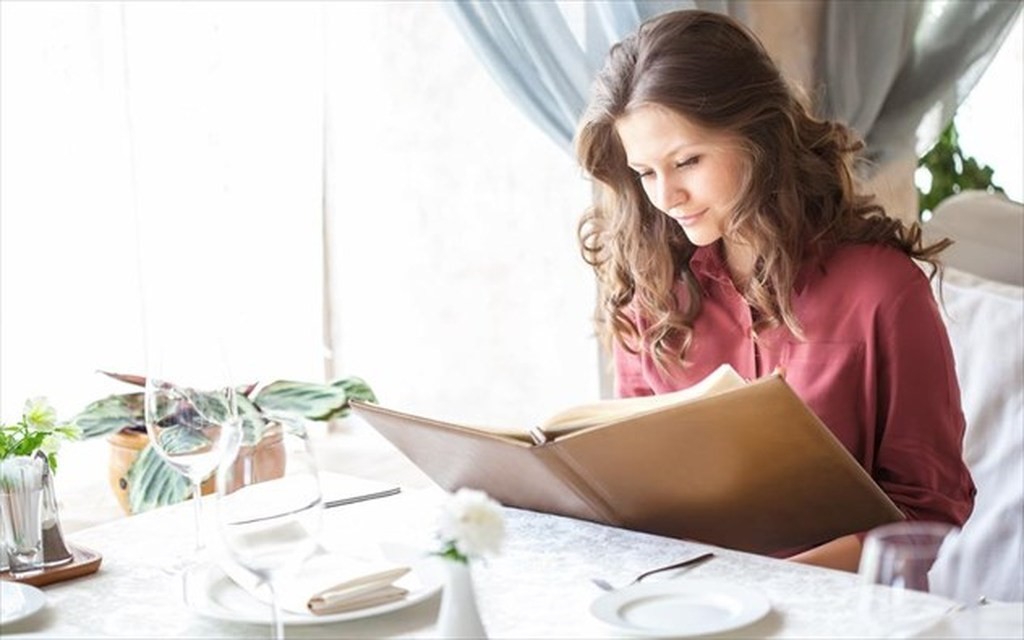 Sometimes the time that students spend on serving tables in cafes and bars brings them not just additional earnings, but also the prospects of obtaining a permanent job.

Working in a bar, student Reed Daw chose the lunchtime shift on purpose. He did not earn much money during these hours, but got a chance to communicate directly with heads of companies who came to the restaurant on their break. Chatting with customers in a friendly manner Reed received a huge amount of business cards and information about open vacancies in the company of a person he spoke with. In the end, after graduating from college, Reed became a marketing specialist at Volusion (developer of software for online stores). 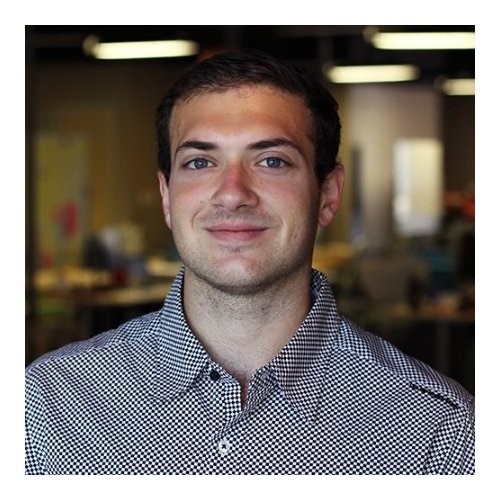 TaskRabbit is a site where users may ask for help with any daily chores for a fee (for example, pick up things from the laundry or go to the store).

Trying to find a job, Spencer Bryan found an interesting use for this service. The student asked for help in meeting with anyone from the staff of TaskRabbit. Brian Rothenberg, Director of TaskRabbit, appreciated the creative approach and decided to meet the resourceful candidate in person. A week later, Spencer received an offer to join the company.

These stories are not the only examples of how creative people can get in their job search. While preparing the article we hame come across a huge amount of beautiful and extraordinary resumes, which we would like to share with you as well. Stay tuned for our new blog post next week!

By the way, if you are looking for a job or thinking about career development in another company, you can visit our page Job Opportunities. 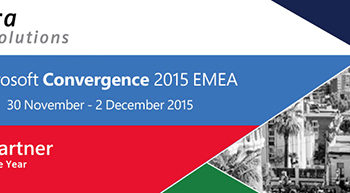 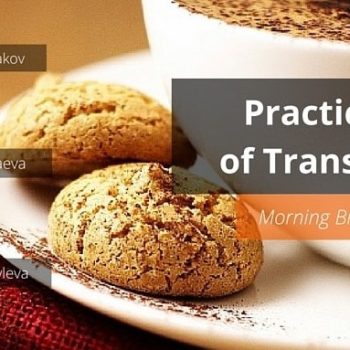