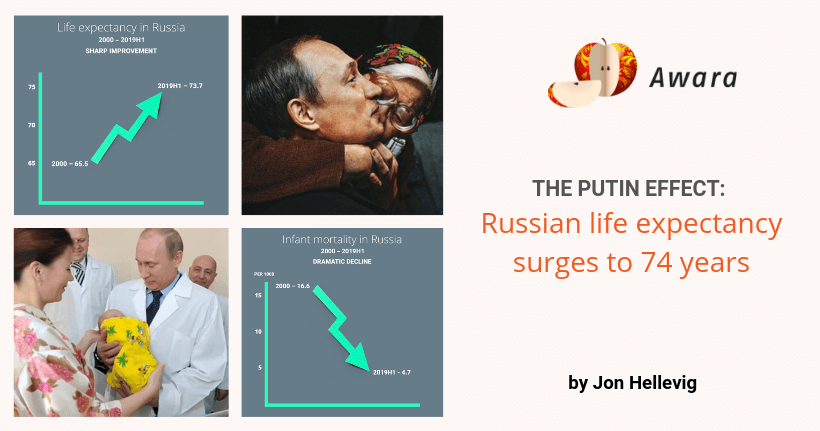 When Vladimir Putin first became president in 2000, he inherited an economically devastated and socially depressed country, with a grim life expectancy of only 65.5 years. That was way behind all Western countries and at a shameful 124th position among the world’s countries. But with political stability, economic growth, and improved security under Putin coupled with decisive efforts to improve healthy lifestyles and the healthcare system, the situation has rapidly changed for the better. According to the latest figures for 2019H1, Russian life expectancy has shot up to 74 years (to be precise, 73.7). Russian women now have an average expected life span of 78 years and men 68. That’s a ten-year gap between the sexes. But the situation back in 2000 was especially extremely dire for men, who then had an average life expectancy of only 59 years. That means a 16% improvement by now. In the same period, women have seen their odds go up by 8%, so the gap is indeed closing. 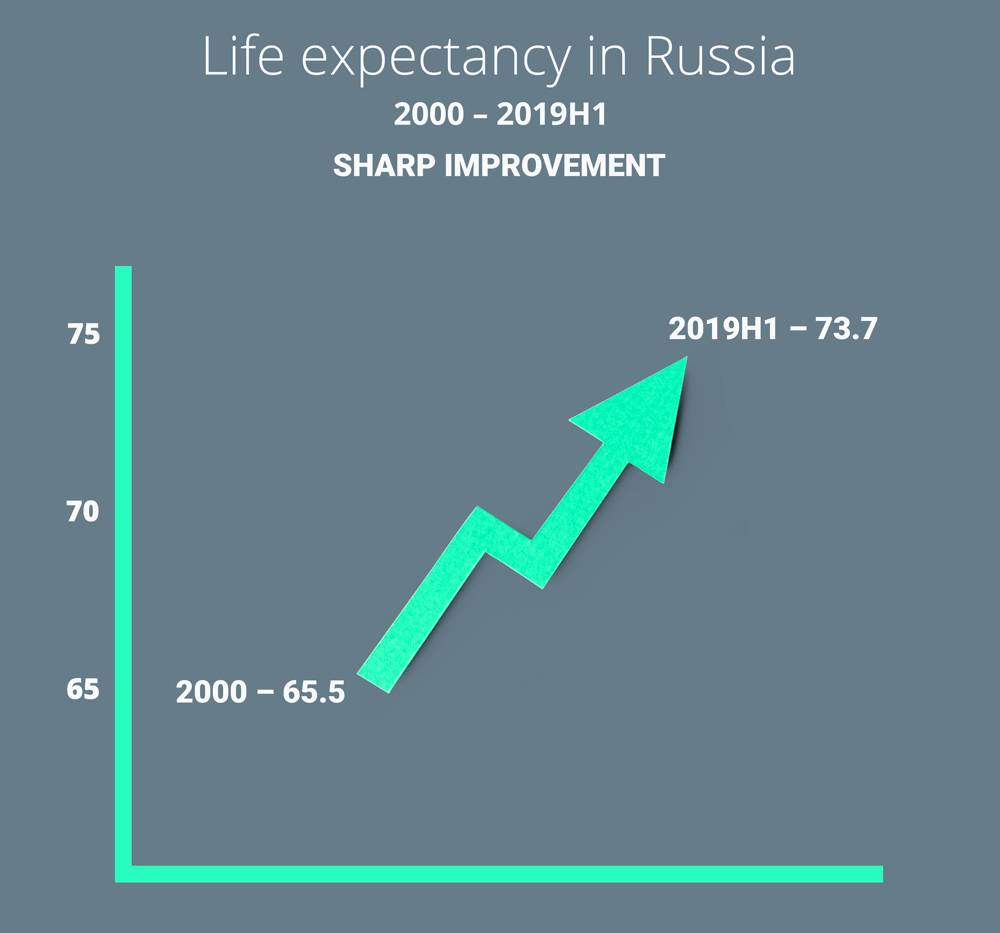 Catch up with and overtake America

How remarkable this improvement is can best be gleaned from comparing Russia’s situation with that of other countries. In below chart we juxtaposed Russia with the United States. In 2000, the difference in life expectancy between the two countries was 11.1 years or 14.5% in favor of the US. But by 2019, the difference had shrunk to only 4.8 years or 6.1%. In the national strategic development programs Putin ordered to be implemented in connection with resuming presidency in 2018, there is a goal to push life expectancy up to 78 years by 2024 and further to 80 by 2030. Looking at the tremendous trend, that seems feasible for Russia to achieve, and when we also consider that the US is actually regressing on this measure, it is indeed to be likely that by 2024 the two rivaling countries have the same life expectancy score. By reaching the rate of 80 according to the 2030 plan, Russia would then actually overtake America. That would of course be sort of a miracle, taking into account how really awfully bad things were in Russia in the 1980s and 1990s. 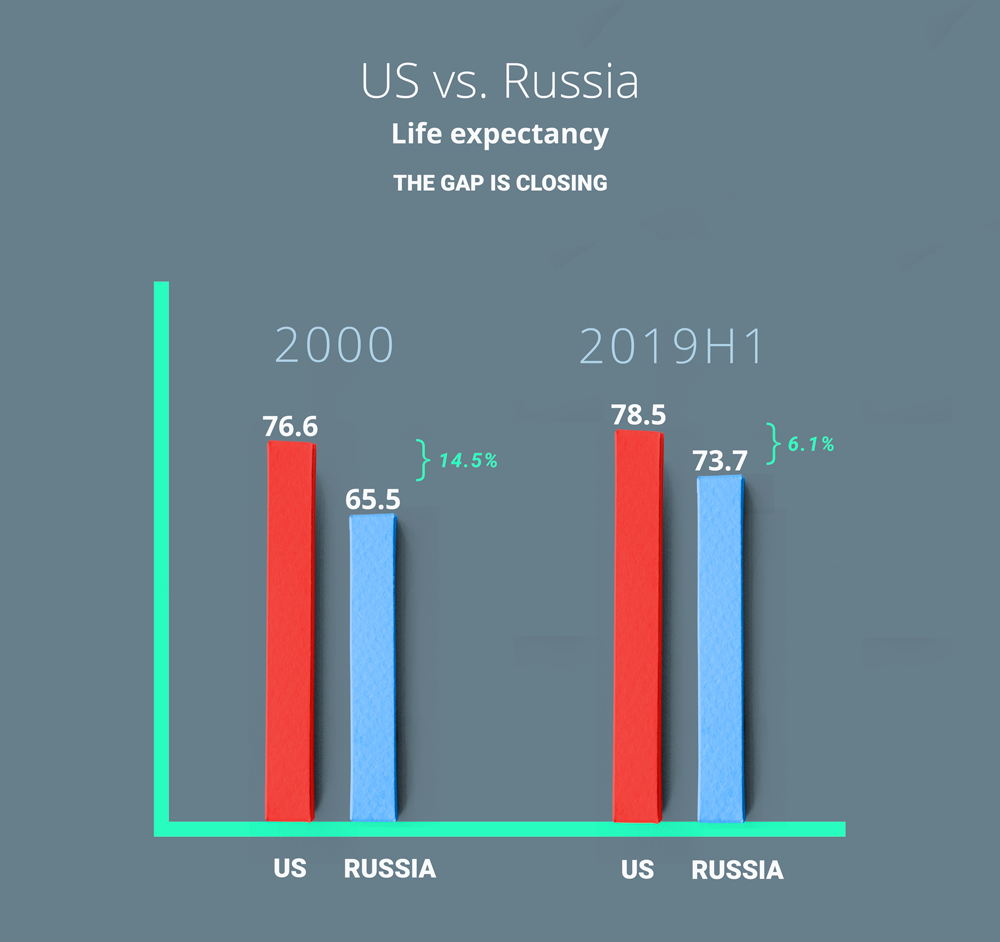 While we must be amazed at this breathtaking speed with which Russia catches up with the US and the rest of the developed world, there is something else not less remarkable. Thing is that Russia has the by far the lowest expenditure (as a share of GDP) on healthcare of all developed nations, presently 5.5 to 7% (different respectable international sources give different numbers). This is set to change by increased government investments in healthcare bringing the expenditure to 7-9% of GDP. The average health care spending in the European Union was 9.9% in 2016, whereas the US spends 17%, by a giant margin the biggest spender. Anyhow, all that money fails to buy the Americans any better health than the Europeans get for almost half the price. In fact, the US falls behind the EU countries by almost 5% in life expectancy, lagging behind in many other health indicators, too. And now even Russia with less than one third of the US spending is fast catching up. It should be noted that Russia runs a mainly public, government financed, healthcare system which is mostly free for the residents. However, those who want to spend more have the option to use private clinics and hospitals.

What’s there in the Caucasian mountains?

The Russian life expectancy figures have some other surprises in store as well. The biggest of these is the unlikely region, which claimed first place in Russian longevity. That’s Ingushetia. Well, it is a region in the Caucasian mountains, so there is the historically precedent that people live long there. But it is also Russia’s poorest region according to per capita gross regional product. Also, according to Russia’s RIA Rating agency[1], Ingushetia was placed 82nd out of Russia’s 85 regions in its 2018 survey on quality of life. Strange, though, I would have thought that life expectancy somehow figures in quality of life? On top of that Ingushetia’s unemployment rate at 26% was the biggest by far in Russia.

According to the 2018 findings, Ingushetia had an average life expectancy of 81.5 years with both men (78) and women (84.5) living the longest by quite a margin to the second. Those figures are on the level of some of the most developed European countries and for women already close to the leading prosperous countries like Japan, Spain and Switzerland. Researchers should take a look at the Ingushs to find out what’s their secret, how they manage to have by far the world’s longest life expectancy relative to the income level. One possibility here is that they aren’t that poor after all. Maybe this is just a prime example to show how those monetary measures are wrongheaded. They eat the healthy food from their own land, grow all their fruit and vegetables themselves and breed their sheep bypassing all kinds of GDP calculations. And I bet they don’t eat much of Western style processed food. I guess their main medicines are the Caucasian herbs, Kefir (the fermented milk) and vitamin D from the sheltering sun. Being Muslims, they are not prone alcohol abuse, either.

Moscow is almost there already

All the other Russian Caucasian regions also figure near the top of the ranking, but the second place went – also a bit unexpectedly – to Moscow. After all Moscow with its 12 to 13 million inhabitants representing a large cross section of the whole country could have possibly fared much worse. Obviously, Moscow is by far the richest region, but we just saw in the case of Ingushetia that it would not necessarily be the decisive factor. Moscow was also quite traumatized in the 1990s and it sure doesn’t have the climate going for it. And people eat the factory food, however, must say that it is usually of better quality than what you would get in the West. All in all, I think the share of processed food is still much smaller in a Moscow meal than typically in the West. And people still eat a lot of healthy stuff grown at their dachas (summer houses), wholesome fatty meats, and a lot of superfoods like sauerkraut, pickled vegetables and mushroom. But on the contrary a lot of bad carbs in form of bread, pastry and potatoes, too. 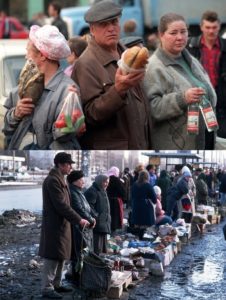 By 2018, Moscow life expectancy had reached 78.2. Considering the 0.8 jump on an average across the country for the first half of this year, Moscow might have reached 79 by now, but such figures have not yet been released. Moscow males scored 74.3 and women 81.8. I am personally amazed that the life expectancy of Moscow women has reached this high level after all what the people have had to suffer through during the perestroika and the anarchy of the 1990s. That’s only about 5% below the level of Japanese women, who represent the epitome of healthy and prosperous life.

Moscow must be seen as the bellwether of all of Russia, so if Moscow can do it, then the rest of the country will follow suit. A lot of the enormous efforts to improve the Russian healthcare system have only recently been put in place or are still in the planning and early implementation stages, therefore there should be no doubt that Putin’s ambitious goals of reaching an average Russian life expectancy of 78 by 2024 and 80 by 2030 are quite doable.

Let’s now take a look at some of the subcomponents of the life expectancy equation.

Thanks to the stability Russia has enjoyed during the Putin years the scourges of murder and suicide have been greatly curtailed. Having had a veritable suicide epidemic in the 1990s culminating in 39.3 suicides per 100,000 people in 2000 – among the worst in the world – the rate is now down to 12 per 100,000. That’s the level of France and well below countries like Finland (13.8) and the United States (13.7). But you would not know it by looking it up in the Internet, because for some strange reason, international organizations like the WHO and World Bank still continue to use totally outdated figures while pretending they are fresh from 2016.

This enormous improvement in the suicide rates reflects the level of social security and sense of hope that has been achieved in Russia during the last 15 years. What is remarkable is that the improvement trend has continued strong also after the 2014 oil and sanctions crisis, which proves that Russia can continue solid domestic development even in a harsh external environment.

The homicide statistics – with the murder rate reduced from 28 in 2000 to 5.4 in 2019H1 – tell the same story of increased security and a better system of law and order.

One especially remarkable and lovely result comes in form of the success in radically reducing infant mortality by almost three-thirds, catapulting Russia into the league of the world’s most developed countries by this important indicator. 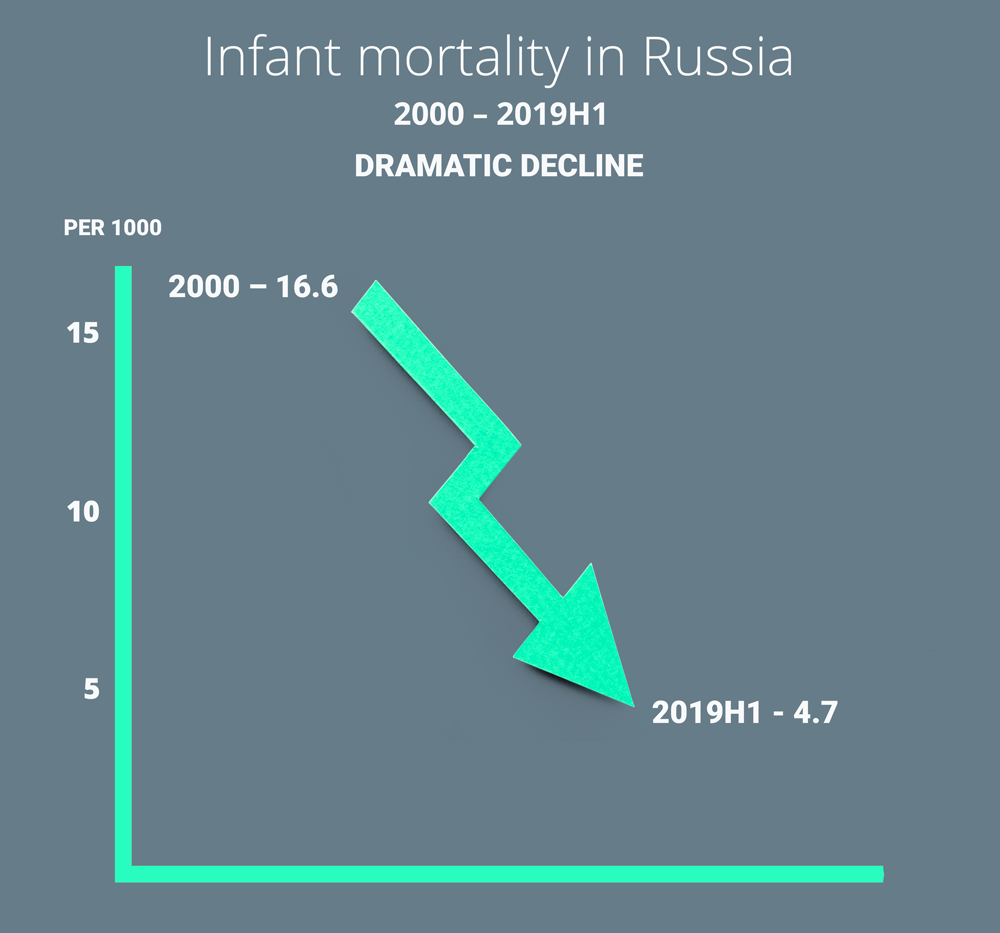 Below table shows how rapid Russia’s development trend has been in reducing infant mortality. The progress in this respect of Belarus has been even more impressive, having the world’s fastest development trend and an absolute score of 2.8 infant deaths per 1000 people, placing it right there among the world’S foremost countries by this measure. Cuba also stands out among the world’s nations. Unfortunately, the situation is not so good in Cuba’s North American neighbor. 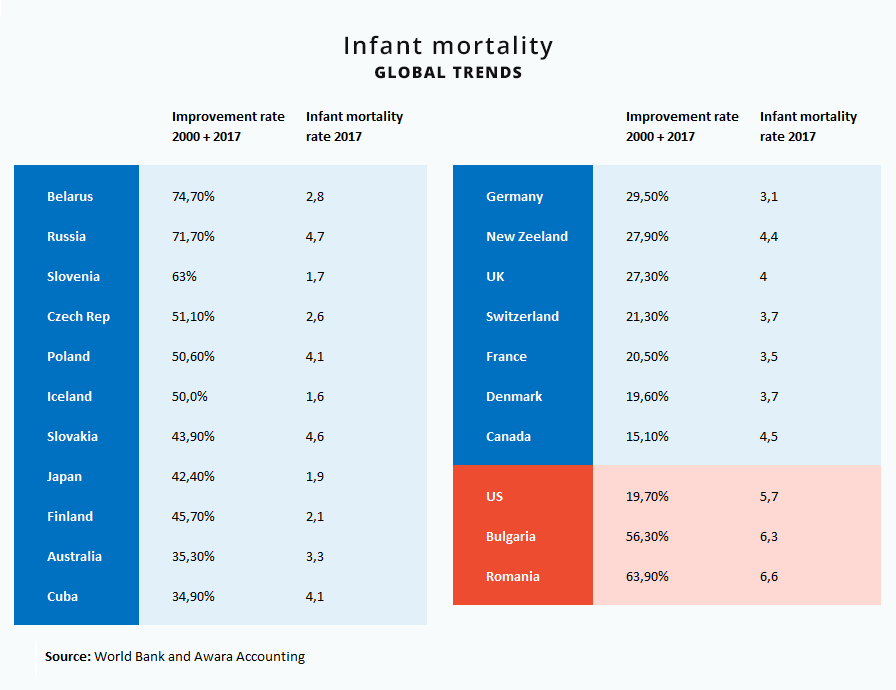 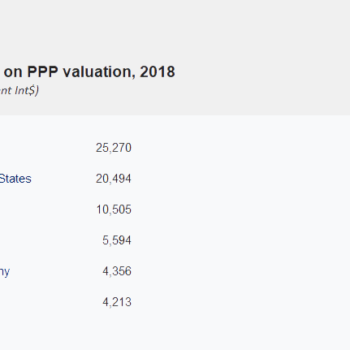 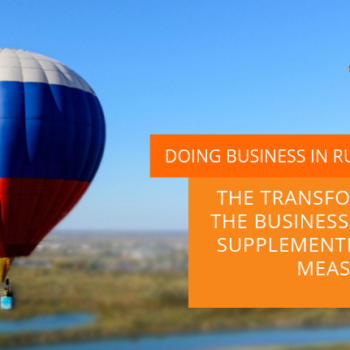