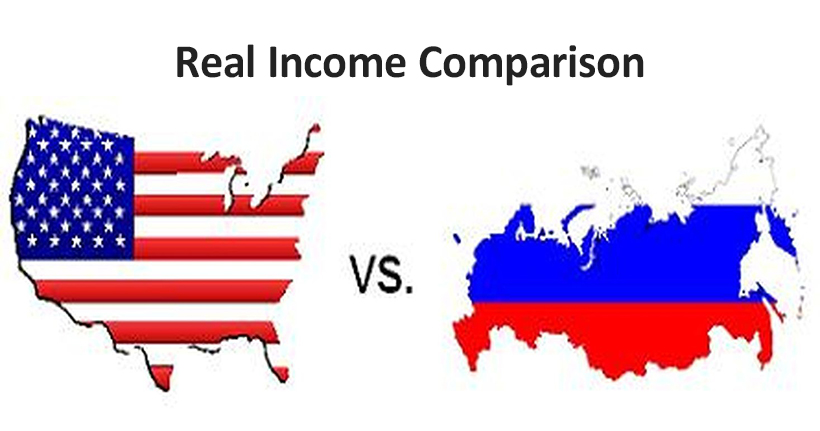 A Russian monthly salary of $1,600 gives at least the same standard of living as $6,000 in America

People in Russia and developing nations often look with awe and envy at the United States salary levels, thinking that the comparatively high salaries over there means that people are affluent. But the problem is that the other side of the seemingly impressive nominal salaries is a punitively high cost of living. In many countries, like in Russia, you get the same standard of living for a fraction of the American cost. Let’s see how it works out with a sample case.

Average salary in Russia has made a huge jump during last 12 months. It is now nominally around 800 USD. That’s still a far cry from American (nominal) salary levels. But to know what the Russian salary is worth you must compare the purchasing power of this amount in Russia with what the same money buys in the US, that is the average price difference. The IMF calculated difference in purchasing power (GDP nominal to GDP PPP; PPP meaning Purchasing Power Parity) was about 2.6 in 2018. This means that in Russia you get as much worth of stuff for 1 dollar that you get for $2.6 in the US.

We compared salaries between Chicago, Illinois and Moscow, Russia. (Tax rates vary between US states, but they are the same all over Russia, so we could have settled for any Russian city, but Moscow provides a particularly good comparison with Chicago.) We made the amazing finding that the Moscow average monthly salary equal to $1,600 (annual $19,200) gives the same purchasing power as a monthly salary of $6,000 in Chicago (annual $72,000). Meaning, you live in Moscow (at least) as well for $1,600 as you live in Chicago for $6,000.

To compare the salaries you must do a series of adjustments. First step is to determine what is the net salary after taxes. In Chicago, pay-roll taxes charged to the worker would amount to 25% for the above mentioned salary (federal and state personal income taxes plus FICA, i.e. social security and medical charges to the worker). In Russia the corresponding taxes amount to 13%. (13% is the flat personal income tax and there are no personal taxes on social security). Further, we have netted the average health care costs from the salary, which in the US would amount to $11,600 while in Russia with universal healthcare they would be zero. We also considered paid vacation and holidays, which were imputed as 7 days for Chicago and 22 for Russia. (In reality the difference could be bigger in Russia’s favor, as much – and a growing number – of the population does not get paid vacation in the US).

The US median wage of $3,970 (annual $47,060) leaves the worker with a net take-home pay (after healthcare) of only $25,000. At the same time, the monthly average salary for Russia (the countrywide average) of $800 (annual $10,400) would give a purchasing power adjusted income of $21,700. To wit, the above mentioned US median wage was given for a hypothetical 40-hour workweek, but about half of the American workers do not make a full working week and therefore earn much less.

[Due to availability of data, we have used average salary for Russia and median salary for the US, for both latest data in 2019). This should not cause any significant difference in the argument we are forwarding].

A recent study found that 53 million Americans or 44% of the working age population earn a median average annual salary of only $18,000. Basically then, at least half of the Americans are working-poor earning less than $18,000 per annum or less than  $1.5 thousand per month. We cannot make a comparative calculation with Russia on this level of American income, because that income is not sufficient to make a living and has to be supplemented with food stamps. charity and Medicaid.

Here is a very interesting comparison between Russian and American salaries and costs mabe by a single Russian man living in a provincial town in Russia. (The story is in Russian, but a machine translation would surely help you to verify the facts). The Russian man tells that his monthly salary of $750 equals the salary of $4,000 of his friend, a Russian emigre in Los Angeles. The report was made by the two friends comparing in detail their monthly outlays. The rent paid by the man in America alone set him back by half of his salary, which he said was the minimum to keep him in a decent neighborhood.

In these calculations we considered taxes, vacation and holiday pay, and average healthcare costs, but in reality there are many other crucial expense items that hit the American workers much harder. Contrary to the US, Russia has a developed and low-cost public transport system, which also means that you don’t necessary have to buy a car and acquire all the costs associated with it. Utilities, phone and internet connections are much cheaper in Russia (internet being the cheapest in the world). Higher education is still free or of low-cost in Russia, wherefore parents do not have to make huge financial sacrifices to this end and people have no student loans. Home rentals also cost significantly less in Russia than the direct 2.6 PPP-adjustment coefficient would show. And very importantly, due to the general equality and public services, there are very little average differences in neighborhoods, which means that people in Russia do not run a similar risk of losing everything and be placed in a slum in case of a personal downturn.

For the above analysis we used data from these reports:

Income and wealth inequality in Russia

In this connection, we must be reminded that income and wealth inequality in Russia is nowhere the levels they have reached in the United States. In a study of 2018, I have addressed this issue by a detailed analysis of the false claims to the contrary advanced by Thomas Piketty and his collaborators.

In the report, I expose the bias and reveal the multitude of methodological errors, distortions and misrepresentation of data, which have gone into producing the Piketty conclusions. After identifying the deficiencies, we have adjusted the main findings announced by the Piketty scholars to reflect the actual data. The corrected data shows that instead of earning 45-50% of national income as claimed by the Pikettys, the top 10% of Russians earned less than 30% of the income. Correspondingly, our corrected data shows that instead of owning more than 70% of the national wealth, the wealth of the top 10 percent of the population was 39% of private wealth and 32% of total national wealth. You may access the whole study from this link.

Widening Income and Wealth Gap and Stagnating Wages in America 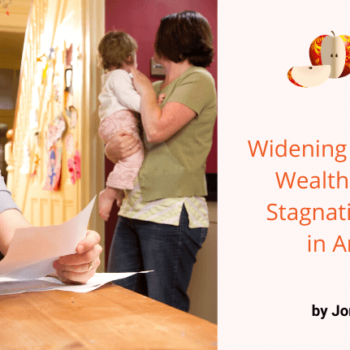 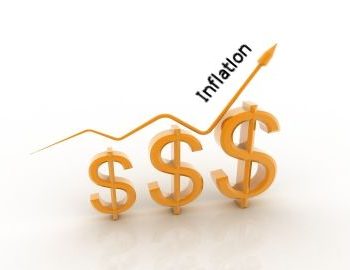