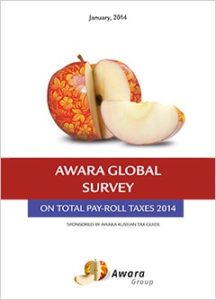 Awara’s global survey on payroll taxes shows that employees receive net in hand salaries that are only a fraction of what the employer must shell out on payroll. On average, taking an income level of 60 thousand euro p.a., the employer must pay 1.8 times the amount that is actually received by the employee. In the countries with the most punitive labor taxes, the employee’s take-home pay is only 40-43 percent of what the employer pays (Belgium, France and Italy). The survey found that of the world’s major economies, labor taxes are the lowest in Russia.

In connection with the publication of Awara Russian Tax Guide 2014, Awara has undertaken a global survey on total payroll taxes. In various countries the survey measured the relation between net take-home pay (net salary after taxes) and the total cost that the employer must bear, considering gross salary and all payroll taxes.  The survey shows how much the employer has to pay in order for the employee to receive a certain net salary after all statutory deductions. This is expressed as the Gross Labor Cost Multiplicator, the factor by which net pay is multiplied to yield the total cost to employers. Conversely, the same is expressed as the Net Take-Home Percentage, the percentage of the gross labor cost that the employee enjoys after tax. This shows the actual tax burden on labor in various countries.

The net take-home salary may be further adjusted for the purchasing power parity (PPP). That is to the real value of the salary in the respective home country. These PPP adjusted calculations yield the best results for Russia. In Russia, PPP on 5,000 euro net earnings would cost the employer only 4013 euro, whereas a PPP on a 5,000 salary would cost the employer 14,056 in Sweden and, for example, 11,426 in Finland.

The failure to understand the above principles of total labor taxes is particularly evident in respect of the global comparison of tax systems called Paying Taxes 2014 by the World Bank, IFC and PWC. The study forms part of a bigger project known as the World Bank’s Ease of Doing Business Index. This bigger survey measures regulations affecting 11 areas of business activity, among them regulations concerning taxation completed in the context of the Paying Taxes survey. The tax survey attempts to measure both the compliance burden on tax administration (number of tax filings and the time it takes to perform them) and the cost of all taxes borne (the total tax rate). Unfortunately, the methodology of the survey in respect to the total tax rate, and in particular concerning the total payroll taxes, is grossly inadequate as it only considers the taxes directly borne by the employer company (employer’s social security contributions), and totally ignores the payroll taxes charged from the employee (personal income tax and employee’s social contributions). As a result the survey portrays a very skewed picture of the total tax burden. A case in point is Russia (as we have seen the country has some of the lowest payroll taxes in the world), which has been awarded a dismal ranking in the indicator of total tax rate. Russia is, in the methodology of World Bank, placed 178th out of 189 countries on this parameter. According to these misguided criteria, taxes in Russia are supposed to take 50.7 of the profit placing Russia 56th in the rating.

You can access the full Awara Global Survey on Total Payroll Taxes here.

In connection with publishing the Awara Russian Tax Guide, Awara issues its research findings on the astonishing tax revenue and GDP figures of the Russian economic miracle, ushered in by the tax reforms under President Putin over the last 13 years.  Read more on this in the press release on Awara’s reasearch on the effects of Putin’s tax reforms 2000 – 2012 on state tax revenue and GDP.

Awara is pleased to announce the forthcoming publication of the Awara Russian Tax Guide by leading Russian tax lawyers Jon Hellevig, Anton Kabakov and Artem Usov. The book is expected to be released February, 2014.

The Awara Russian Tax Guide is one of a kind, being the only English language book that covers all the main provisions of Russian tax law. This book guides the investor and other interested readers, giving them a thorough understanding of the Russian taxation system as it pertains today.

The introduction to the book presents the astonishing tax revenue and GDP figures of the Russian economic miracle, ushered in by the tax reforms under President Putin over the last 13 years. Click here for the press release on the publishing of Awara Russian Tax Guide.

The book can also be ordered on Ruslania website (that is one of the largest whole sellers and distributors of Russian books and periodicals). Click here to buy the E-book or here to buy the printed version.
About Awara:

Awara is the leading foreign owned business administration services provider on the Russian market, serving international and local organizations and individual entrepreneurs. Our services comprise a wide array of advisory for strategic business development, establishment and investment, and the implementation and execution of our advice; covering all areas of:

Press Release: Awara to Publish Book on Taxation in Russia