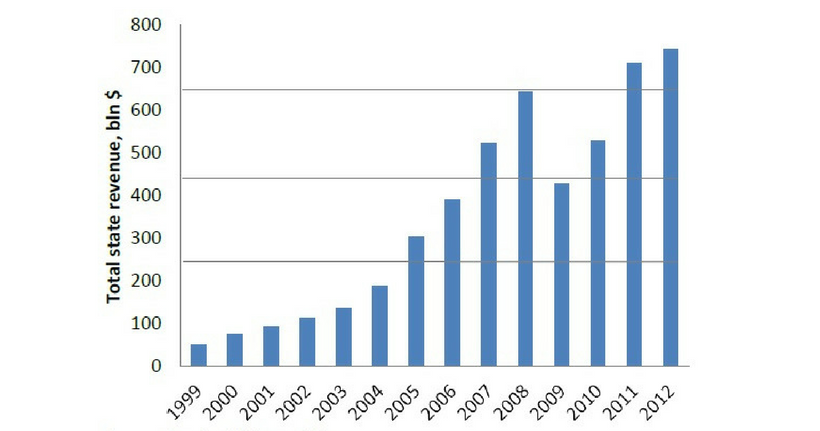 The taxation system, or rather the lack of a transparent, predictable and stable taxation system, has widely been considered as one of the main reasons for the economic woes that Russia experienced during the 1990s, after the country entered the shaky path of democracy and market economy. But after the tax reform was ushered in beginning from 2000 the taxation system went from being the big hindrance for investments and economic growth to being the locomotive of Russian economic success.

In the Soviet Union, the predecessor state to Russia, there existed in practice no real taxation system. This was quite natural against the background that the USSR, with its planned economy, was meant to be the first ever state without taxes. Practically, all property and assets were state-owned and the central planning organization collected and allocated resources at its will. In the planned economy companies were not actually taxed, they rather transferred certain residual amounts of financing back to the center.

With the downfall of the USSR and the economic reforms in Russia, a tax system started to emerge at the beginning of the 1990s. During these early years of reform the tax laws did not take shape within a unified system, but rather through a chaotic ad hoc adoption of laws and regulations. Moreover, during these early years the laws regulating taxation kept changing frequently. There was a lack of clear provisions of norm hierarchy (knowing which laws would take precedence over others) and a lack of statutory rules defining the authority of various governmental bodies. This led to serious flaws in the legal protection of the taxpayer, who was often left to the arbitrary whim of various authorities. Corruption and arbitrary practices were widespread among the officials of the tax authority.

It was only after Vladimir Putin became president in 2000 that order was brought into taxation in Russia, with the great tax reform and the gradual adoption of the Russian Tax Code Part II with lower tax rates and clearer rules concerning each of the different types of taxes. Tax Code Part I, containing the legal and administrative principles regulating taxation, was enacted in 1998. Gradually over the years, much aided by court practice and the precedents developed by the Constitutional Court and Supreme Commercial Court (“Supreme Arbitration Court”), the principles of Russian taxation and tax administration have developed to represent the best area of Russian state administration. Today the tax reform stands out as the prime example of Russia’s success during the 12 years of reforms. At the heart of the reforms lies the classical liberal tax theory, according to which lower taxes translates into increased tax revenues. Therefore, it is an interesting historic irony that Russia, a country where the socialist creed reigned strong until very recently, has now been converted into the international showcase of economic liberalism. In America Ronald Reagan and like-minded politicians were known for campaigning for such tax policies, but it is only in Putin’s Russia that they were implemented. Hardly could Reagan have even dreamt of such measures as Putin’s 13% flat income tax rate. Fair to say that never before has there been such a dramatic and speedy shift from socialist tax policies to classical liberalism, and hardly could the results have been any more impressive.

The tax reform as a model for far-sighted and well-thought out legislation also had the side-effect of helping to improve the overall lawmaking process and bring stability to state administration. This is also the area of the judiciary that is showing the most encouraging signs of development towards a system where court precedents are awarded a significant role, sometimes even resembling more the Anglo-American system than the stiffer European practices.  As we predicted in the introductory chapter to the 2007 edition, courts and court practice with their precedents have had a decisive and positive role in shaping the tax laws in Russia.

The big remaining problem with the Russian tax system, notwithstanding the significant improvements during the last few years, is the heavy administrative burden, red tape and bureaucracy that the taxpayers are subjected to. But it seems that the Russian Government has finally acknowledged the problem, and therefore there are hopes that these excesses will be tackled in the future and the system streamlined.

The tax reform spearheaded by Putin has given Russia Europe’s most liberal system of taxation. Today in Russia there are in place transparent tax laws and internationally low tax rates, which provide good incentives for hard work. The corporate profit tax rate is 20 % and in taxation of personal income residents of Russia enjoy a record low 13% flat tax rate for all income brackets.

The total real tax on labor costs in Russia is among the lowest in the world. To determine what is the real tax rate on labor (payroll taxes), one must consider not only the personal income tax but also all the other statutory charges on medicine, pension and other social security benefits that are charged both from the employee and the employer (social security contributions). In Russia no social security charges are levied on the employee (the employer bearing the entire burden) whereas in most countries globally the employee is also liable for social security charges. The employer’s social contributions are charged on a regressive scale at a rate of 30% for the first 624 thousand rubles of annual salary, after which the rest is charged at a rate of 10%. (The limit was 568,000 in year 2013). In addition there is only the mandatory workplace accident insurance with rates that vary according to the activities of the firm. The rate would be 0.2% concerning the typical office worker.

You can read the full article here.